Proposal: a portion of web3 game token Sales/Royalty/emission go towards buyback and burn 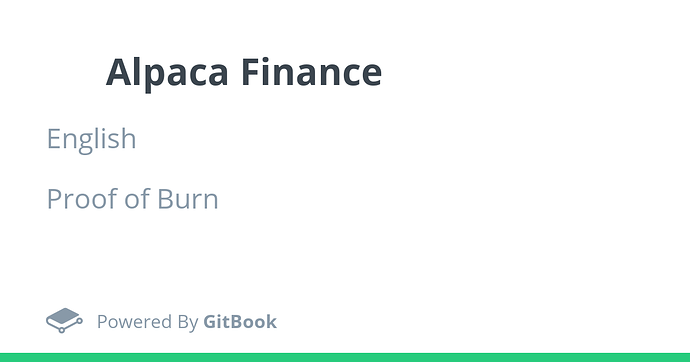 Alpies NFT Sales** - 20% of the sales proceed will be used for buyback and burn.

We can learn from NFT sales/royalty , do below things

Web3 Game Token Sales** - 20% of the sales proceed will be used for buyback and burn.

burn a small number alpaca token (maybe 1, maybe 5, or any other proper number) for any breeding, or something like that.

with above proposal, web3 game can contribute to buyback directly-- and it must be a huge contribution.

Of cause, this post only shows how web3 games can contribute to alpaca token, not exactly how we need to implement.
the point is: a part ot game token sales/secondary sales/emission/breeding sustainablely go towards buyback and burn

$ALPACA token is currently not promised these things on a gaming token. ALPACA hasn’t funded the game, Alpies sales did. There is also a separate team working on the game, not the ALPACA team, who are funded by that.

thanks for your reply

if $ALPACA token is not related to this game, and web3 games has its’s own independent tokens and tokenomics, then I am just wondering what is the value of web3 games to $ALPACA token.

Game NFT sales is a one-off thing and royalty sale is too small (not able to find it in buyback details at all), so we can focus on web3 game , not NFT. 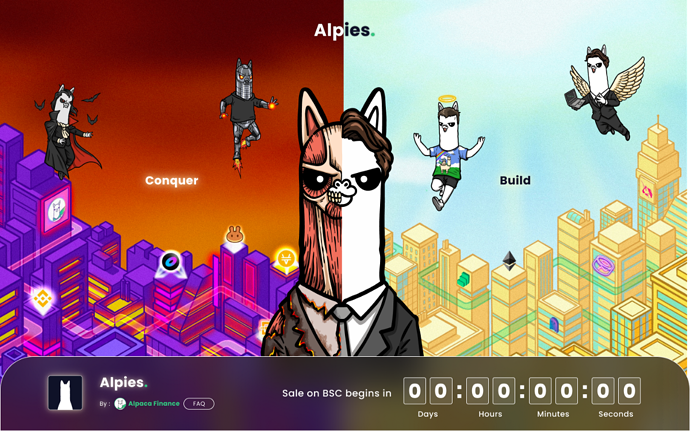 Last year when games was intraduced in an announcement made by you Samsara, it is said: “the game will feed back value to ALPACA holders through revenue sharing”, again, it is “game revenue sharing”, not “NFT one-off sales and small number NFT royalty”.

If Alpaca web3 games does not share “revenue” with $ALPACA token, then I think there is NO “value link/relation” between web3 games and $ALPACA token. They only share the same name “alpaca”, but they are 2 completely different things in terns of “token value”.

Now, it seems alpaca web3 game is an independent project, it is developed by a separate team, has it’s own tokens system/tokenomics, and not share revene with alpaca token(we are talking about “revene sharing”, not NFT sale 20% one-off thing). however, alpies sales (Which funded web3 games develpment) is in alpaca finance community and under “alpaca finance” name, I bought 20 alpies only because it is a part of alpaca finance, but now my understanding is: web3 games has nothing to feed back to alpaca token except that NFT sales 20% one-off thing , if this is the case, I would never have bought any alpie, and would have bough much less alpaca token(maybe zero) compared to my current holding. In my understanding, alpaca token does not have much potential without web3 game revenue sharing

In your announcement last year, “revenue sharing” is a part of promise when game was intraduced, I think I was misled by your announcement, I have been waiting for web3 games revenu sharing since last year. at first it was said Q2 2022, but postponed to Q3, then Q4, now it is scheduled to 2023 (not sure if postpone again), but the worst thing is, after long time waiting, “web3 game revenue sharing” is gone — this is not a minor change, it is a fundemental change.

Please let me know if I missed something, I hope above assumption is wrong.

The game is a project that is being built at the expense of Alpaca resources. This is a fact.

The game uses the Alpaca team, the Alpaca community, the Alpaca website, the Alpaca brand. Please don’t tell me that Samara and other Alpaca team members don’t spend their working hours developing and promoting the game.

I’m an Alpaca holder and you’re telling me I’m not getting anything from the game. Please don’t tell me about the income from NFT. This income is so small that it does not affect anything.

I feel cheated. And my tokens are in the lock…

If team had clearly told me “game will not share revenue to alpaca token”, I think wouldn’t have bought any alpaca token. but after I lock my token for a long time, I was told that my token can get nothing from web3 games (please do not mention 20% NFT sale one-off thing)…

I have to clarify something about NFT sale: 20% first sale is OK, 1.2M is a good number, but it is only an one-off thing. after that, royal fee is tooooo small. So , we do not need to disucss NFT any more, please focus on major points in this thread-- whether or not web3 game share revenue to alpaca token.

If team has other interest/benifit out side alpaca token(for example, interst/benifit in web3 games token ) so team does not want to share revene with alpaca token, then please tell us the truth.

Looking forward to hearing from you.

we will make an announcement with those details when they’re ready.

Thanks for you reply,
but my questions in this post is still not answered.

please tell investors truth and neccessary information . if game revenue will be taken out of Alpaca token, then at least please tell us this decision.

looking forward to hearing from you.

I understand your not happy with the process but again the details will be released when they’re READY, other than that its just speculation. and Im SilentJJ not Sam 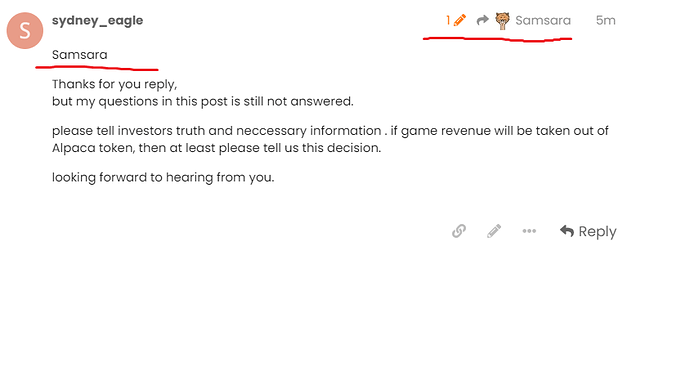 it has been more than 1 year after the intraducing of games, and you are still laudly saying to investors: “will annouce it when it is ready”.

People have asked about this before and we always said the same thing which is ALPACA token is not guaranteed anything from the game. It may have some relationship but we didn’t promise it since Alpies sale.

Here is the last thread from July when you made the same comments and we gave the same answers: How does alpaca finance web3 game contribute to alpaca coin value

The game uses the Alpaca team, the Alpaca community, the Alpaca website, the Alpaca brand. Please don’t tell me that Samara and other Alpaca team members don’t spend their working hours developing and promoting the game.

Alpaca team members spend 0 of their Alpaca-required working hours promoting the game outside of responding to topics and questions like these. Like I said, there’s a separate team working on it.

What you’re talking about are Alpies NFTs which ALPACA token did have, and still has, revenue sharing for, which is extended into Alpaca Gaming. The game we’re going to release itself, and any associated new web3 assets created from it will not be Alpaca-branded.

I’m an Alpaca holder and you’re telling me I’m not getting anything from the game. Please don’t tell me about the income from NFT. This income is so small that it does not affect anything.

This is why ALPACA token received a portion of the sale and continues to be attributed a share of Alpies trading volume.

As I said here and whenever anyone asked about this before, ALPACA token is not promised a direct revenue channel from the game. There may be something but there might not. What ALPACA has and will continue to have is indirect revenues through Alpies trading volume.